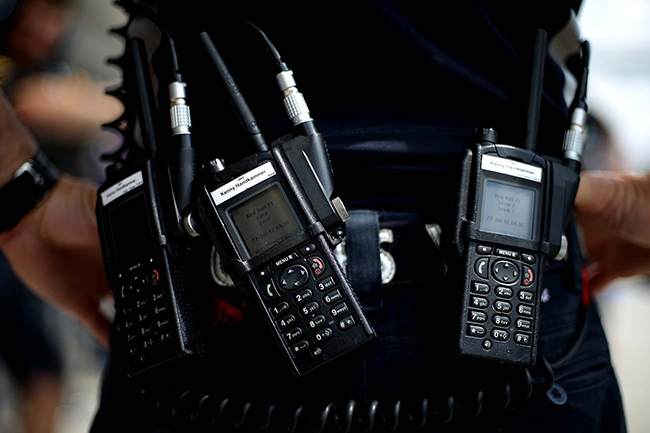 Specialists of “Eurodesign” company (the main partner of Baku City Circuit on all technological systems and IT services) spoke in details about all the elements of this complex.

Different incidents often happen during the races: pilot smashes, violation of the sport regulations, wrong actions of the teams in the pit lane etc. Baku City Circuit will use 39 IP high resolution cameras which will be installed along the whole track in order not to leave a moment unnoticed. All video images "flock" into a unique center based in Race Control building - the real heart of the circuit. The Race Director and his staff are based in this center and oversees all what happens on the track using the video wall which consists of 18 professional 55-inch high resolution LED screens – all actions of the pilots and the marshals are under control!

To save the whole data recorded by the cameras a special digital storage created capable to store the captures from all video cameras throughout the event.

Cameras will be controlled control and playback will be managed using the latest software which allows displaying any camera views or playback on any part of the video wall.

On the same wave

Radio communication is the key element of the race organization. It will be used both by marshals and the employees of the promoting company to coordinate their actions on site. About 1,000 radio stations of TETRA digital standard will be involved in total – keep in touch!

When the count goes for a fleeting second

Formula 1 is the sport of high technologies and the fastest bolides, so the accuracy of all indicators on the track, as well as incident warning system is critical.

For example, the Formula 1 uses its induction loops that "bump" into the asphalt to determine the timing and speed of bolides movement in a particular part of the track. FOM (Formula One Management) as well brings speed and temperature sensors, starting lights, traffic light for the pit lane and other equipment - this "baggage" travels with the teams throughout the whole season.

The specialists of Eurodesign company as well will set the alarm system on the pit lane with a loud sound and light alarm, warning of any object entering the pit stop.

Is that all? Not at all!

Race track electronics meets the needs of not only the teams and the marshals, but also the spectators. Each Baku City Circuit stand will be equipped with sound notification system, which allows the guests of Grand Prix of Europe to listen the race commentary and be aware of important announcements during the event.

Generally sound is an important component of any event, and when it comes to such an event as the Grand Prix, the complication increases significantly. Not only all the tribunes must be provided with sound, but for example, the media center, which will house more than 400 journalists from around the world, and be the place where the official FIA press conferences will be held.

Huge high quality LED screens will be installed in front of each stand and Pit Stop building for total immersion of the fans into the Formula 1 atmosphere – the will be 15 screens in total. The largest of them will be 40-45 square meters. Therefore no guest of the Grand Prix will miss any moment of breathtaking actions on the track.

Television system will be arranged along the track for all the guests of the Paddock Club, FOM officials, FIA, the teams, media and sports commentators allowing them to follow the live broadcast of the race from the FOM. More than 350 high definition 40" screen TV sets will be used to screen the recorded images.

We don’t forget about the Internet network which will be provided in media center, Race Control building, each of F1 teams boxes, medical center, as well as FOM Broadcast Centre, Host TV compound and Paddock Club Racing Support.
Alongside with internet access all the mentioned locations will have an opportunity to use landline (VoIP) with international access.

The most demanding users of the web at the event are journalists and photographers who need to send huge size of data, follow news and so on. Alongside with wire Internet access they will have access to High Density Wi-Fi network with 100% fault tolerance system. All pictures will be published on time!

Cable infrastructure along the track will be provided on a bi-directional "Ring" topology with redundancy of basic equipment and use of portable drums with fiber-optic cable that will provide high availability and rapid deployment. This is so important in the temporary urban highway infrastructure conditions.

It won't be superfluous to note that all of the equipment and operational principles of the systems meet all the requirements of FIA, FOM and Tilke bureau which carry out daily monitoring of preparations for the European Grand Prix in cooperation with Baku City Circuit experts.

Totally 100 people including temporary staff, who has already started to undergo special training, will work for ensuring the operability of racing electronics and other technology systems at the Grand Prix.

Considering that the track is temporary and goes through the city the time to install the systems and adjust the equipment will be limited. Thereby, Eurodesign staff will conduct full testing of all system components in a special temporary site. This phase starts on March 1, 2016.

We remind that Formula 1 Grand Prix of Europe will first ever be held in Azerbaijan from 17 to 19 June 2016.