Baku is the capital and the largest city of Azerbaijan, as well as the largest city on the Caspian Sea and of the Caucasus region. It is located on the southern shore of the Absheron Peninsula, which projects into the Caspian Sea. At 28 metres below sea level Baku is the lowest lying national capital in the world and is home to approximately 3 million people. It is twinned with the European cities of Naples in Italy, Sarajevo in Bosnia and Izmir in Turkey. 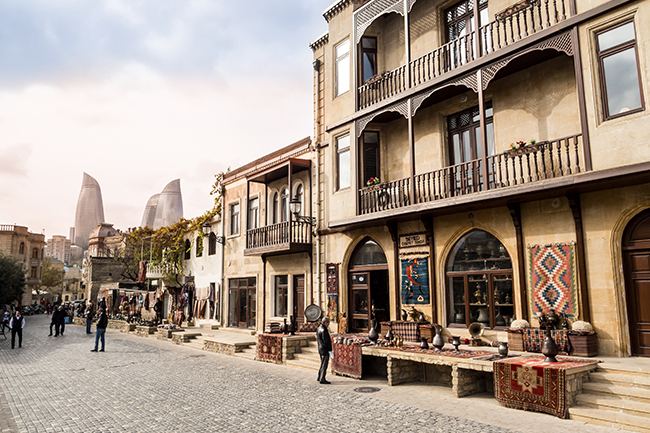 The capital city lies on the eastern side of Azerbaijan and is surrounded by the Caspian Sea - the world’s largest lake. Baku is famous for the unique Neft Dashlari (Oil Rocks), in the middle of the Caspian Sea, which is the largest inhabited, and oldest offshore oil city in the world. 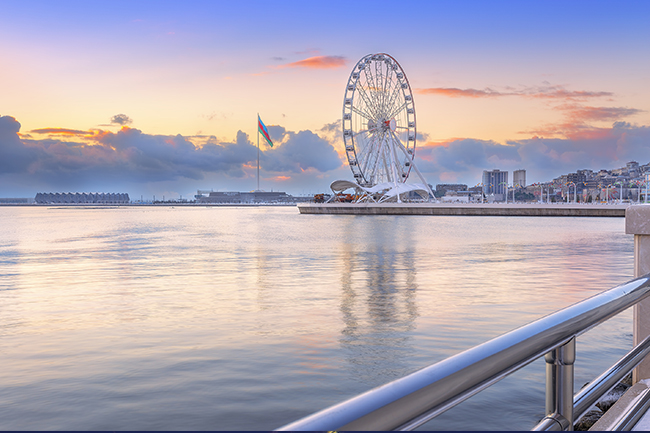 Baku offers visitors the opportunity to enjoy all the attractions that a modern European city has to offer while also embracing traditions and culture that date back to medieval times.

Located at the crossroads of Europe and Asia, the city is one of the world’s best-kept secrets, hosting world-class sporting and cultural events and modern and ancient attractions, presenting visitors with no end of things to discover and enjoy.

Perhaps one of the most unique features of Baku is that it is the first European city, which the sun rises in. The picturesque city is built on a high hill and forms an amphitheatre that slopes down to Baku Bay. It is often compared to San Francisco, or Naples in Italy with whom it is twinned.

Baku’s reputation as the ‘City of Contrasts’ is well earned with the city having perfectly combined the beauty and intrigue of its ancient past with its ambition to establish itself as a modern European city featuring award winning architecture, business centres and skyscrapers.

The city consists of two principal parts: the contemporary downtown area and the old Inner City (Icheri sheher)
The Old City of Baku along with the Palace of the Shirvanshahs and Maiden Tower were confirmed as UNESCO World Heritage Sites in 2000.

Baku has existed for thousands of years and is firmly established as the pearl of Azerbaijani architecture and culture. Within its old town walls visitors can travel back in time as they explore a maze of narrow cobbled streets, ancient buildings and the courtyards surrounding the 12th century Maiden Tower and the ornate Palace of the Shirvanshahs.
The modern face of Baku is equally impressive. New developments have redefined the hills that line the picturesque Bay of Baku and even the coastline itself. 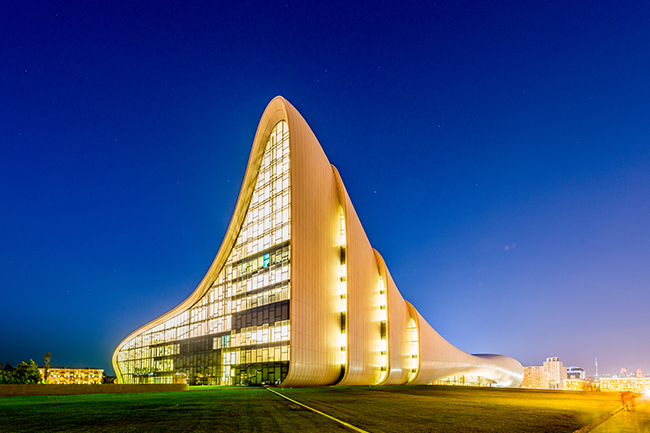 Baku’s Flame Towers are the tallest skyscrapers in the city at 190 metres, the flame shaped design of which obviously symbolises the essence of Baku. The spectacular buildings, which have become a symbol of the city’s new modern outlook, comprise apartments, a hotel and offices. The Flame Towers take on another dimension each evening when thousands of LED lights illuminate the façade of the three towers to display the movement of a fire visible from the farthest points of the city. 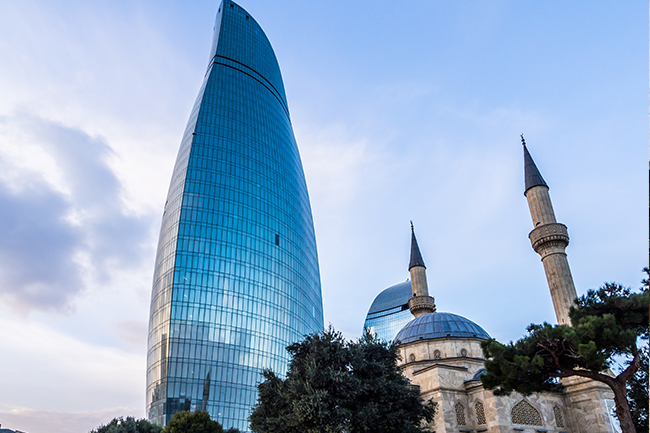 The giant national flag, standing at 162 meters, was named in the Guinness World Record Book as the tallest unsupported flagpole. It stands just next to next to Crystal Hall that was built specifically for the 2012 Eurovision Song Contest and has also played host to J.Lo, Rihanna, and Shakira.

Baku’s shopping options are growing steadily. Anyone with a keen eye for fashion and nose for sniffing out hidden gems will have plenty to explore when visiting the city. No matter your budget, Baku’s shopping outlets have something for everyone. 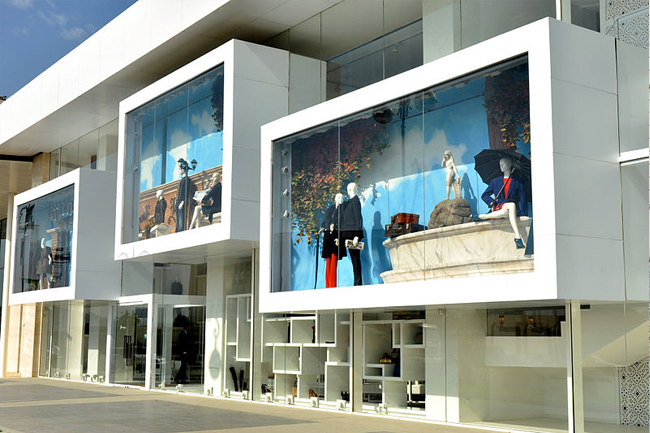 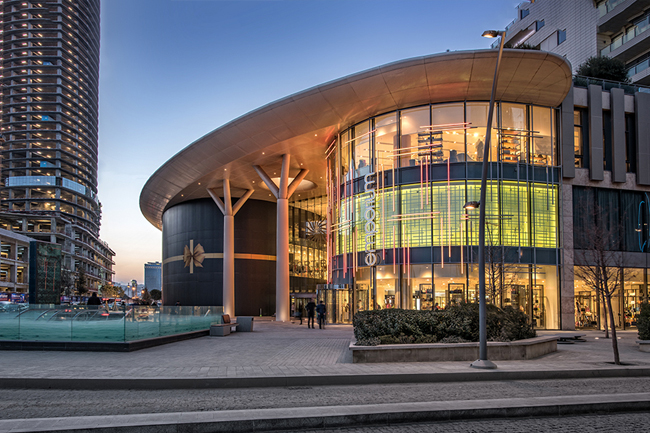 Baku is known for its carpet-makers, whose beautiful products make for great gifts, souvenirs, and mementos. Some of their creations can truly be classed as works of art.  Most carpet sellers can be found in the old town, where you will need to haggle to ensure a good price! 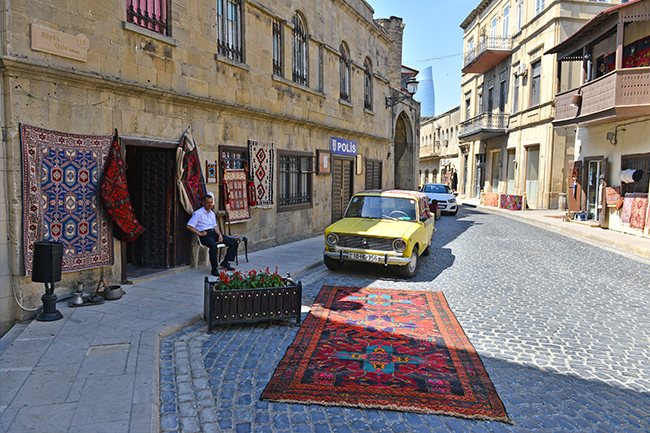 Baku is also home to many arts and crafts fairs. Similarly, in various cities across Azerbaijan, handcrafts, silk, and other artefacts are always on sale in street markets.

Azerbaijan’s incredibly rich cuisine draws its inspiration from many nations and yet still remains distinctly unique.
When visiting Baku, you can eat edgy fusion creations, aromatic Asian dishes or Italian classics if you so choose, but most visitors prefer to indulge in more local fare such as the city’s famous kebabs or flavoursome plov or pilaf, a rice dish served with lamb, fish, or even dried fruits to create a sweet variation, as well as fish dishes, including lavangi, whereby the fish is stuffed with minced walnut and onion.

Nine of the world’s climate zones can be found in Azerbaijan. This provides lush fertile land, which produces a great quantity of fresh herbs, and vegetables, which contribute to the high quality of the local organic food. Food forms a significant part of the culture in Azerbaijan and is deeply rooted in the history, tradition and values of the nation. 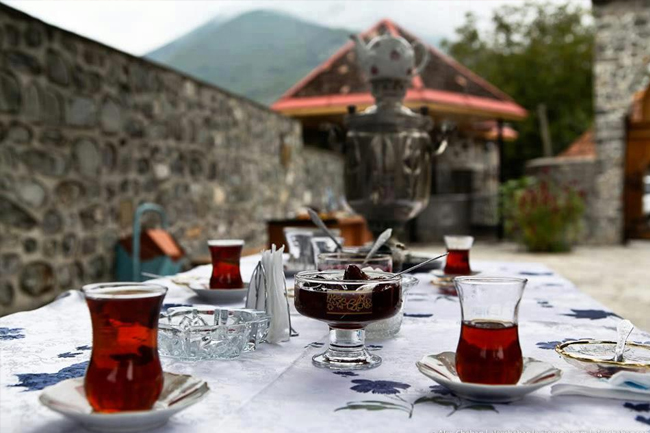 No visit to Baku would be complete without enjoying some of Azerbaijan’s traditional tea, served in armudu glasses (pear-shaped glass) accompanied by a side plates of homemade jam or a selection of Azerbaijani sweets and dried fruits. One of the best places in Baku to enjoy this tea-experience is at Chaykhana - an open-air teahouse that is perfect for relaxing and enjoying summer evenings.

Baku at night is lit up like a shining metropolis, a fantastical vision of ultra-modernity. According to Lonely Planet’s ranking, Baku is also among the world’s top ten destinations for urban nightlife.

Baku has a rich nightlife, which goes on until the early hours and often into the next day!  The Azeri people love to party and in a modern, liberated and prosperous city like Baku there is plenty of opportunity to do so. 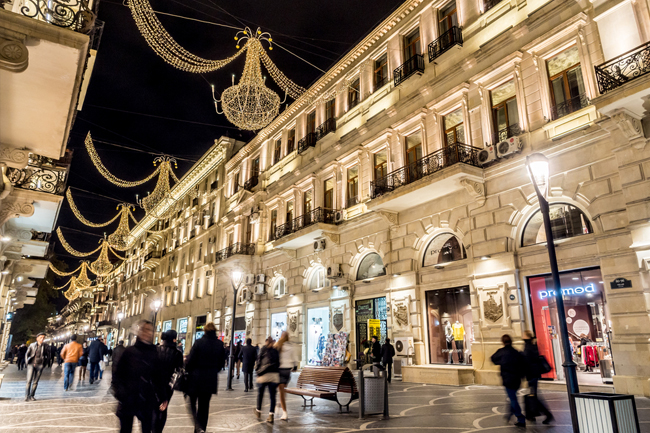 Baku’s café culture and social scene revolves around Baku Boulevard, which features a six-kilometre promenade of shops, restaurants, cafes, clubs and family friendly fairground rides. Here visitors can enjoy al fresco dining and cocktails in bar terraces overlooking the Caspian Sea. Live music is a feature of the energetic and eclectic nightlife in the city. Visitors can experience homegrown rock bands, the ever-popular karaoke bars, Baku’s unique jazz or some traditional mugam folk music. Bars, clubs and discos are open till late in the morning, especially during weekends.
Most nightclubs have sprung up in the last decade or so after the influx of oil industry expatriates. Food and drinks are reasonably priced.

Theatre has long history in Baku, with a diverse range of theatre houses including a Mime and Puppet Theatre. Azerbaijan also prides itself with having created the first opera of the Middle East.

The kind of life that Azerbaijani people lead, the festivals they celebrate, their traditions and outlook on life, all has a great impact on the theatre of Azerbaijan. Traditional ceremonies, their dressing styles, conversations, all form an integral part of the Azerbaijani theatrical experience. Dramatic clothes, masks, traditional dances, choral songs and dances all come together to dramatize a typical Azerbaijani play.

The development of theatre has come a long way since Soviet rule gave way to an independent Azerbaijan. Theatre during Soviet rule represented the struggle of Azerbaijan’s people for their independence along contemporary, cultural and traditional formats. Theatre after Azerbaijan achieved independence has changed much, with present situations and topics affecting the content of the play. Theatre has also started touring in foreign countries, helping to spread the tradition and culture of Azerbaijan to far fling locations.

Azerbaijan has a long and rich history of culture, tradition and struggle for independence. A variety of interesting exhibitions can be found throughout the city reflecting this rich and varied past. 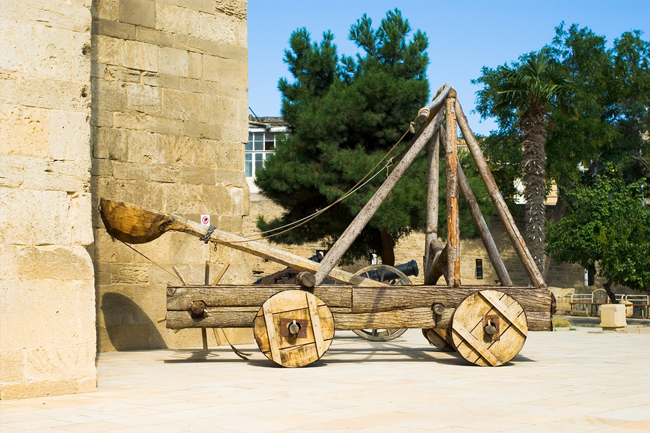