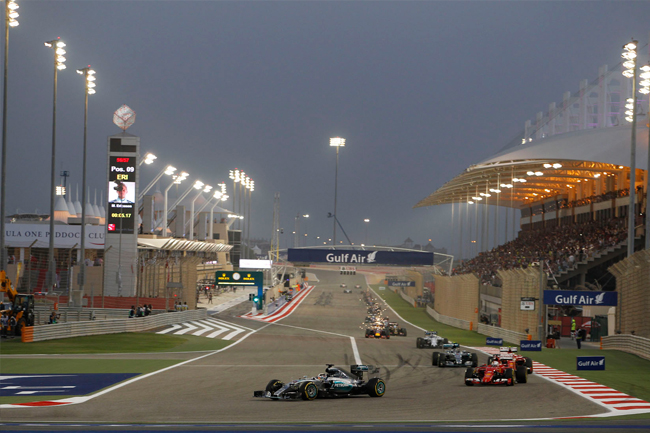 Today we will tell you about the best four Bahrain Grand Prix.
The race in Sakhir has became unique to F1 in many ways - the first Grand Prix in the Middle East, the first race in recent years that took away from Australia the right to open the championship, a unique track, which housed the World Cup weekend in different configurations ... On the whole, the Bahrain Grand Prix has something to brag about!

The Middle East has never felt the shortage of money, that is why the ambition to hold a Formula 1 race was a solved case - the ultramodern race track rose up on an empty place in the desert and it held 2004 season’s championship for the first time.

The first race in the history of Bahrain was held under the sign of Ferrari - starting the season with two wins in a row Michael Schumacher dominated again on the new track. Pole position, fastest lap and victory in the Grand Prix became a great start of Sakhir Circuit "career" in the Formula 1.

There are not so many tracks where the two-time Formula 1 champion Fernando Alonso holds the record for most wins. Sakhir is one of them.

In his first champion season Spaniard confidently won the Bahrain Grand Prix, while his rivals have faced a number of sporting and technical difficulties. The following year, the fight was a bit more acute but with the same final result.
Looking ahead, we say that the triumph in season 2010 was the third one for Alonso and a record among the all participants of the Bahrain Grand Prix. But this year his sole reign at Sakhir may come to an end - Brazilian Felipe Massa, German Sebastian Vettel and Briton Lewis Hamilton have two wins on this circuit so the latter two have a real chance to rewrite the statistics in their favor.

Bahrain Grand Prix 2010: a debut of the Russian racer

For the first time in many years Grand Prix of Bahrain opened the season of 2010 instead of Australian Grand Prix - Middle East Race spotted for Melbourne stage. Australia was involved in other sporting events at that time.

However, Russian fans had a different reason to take a closer look at the Bahrain Grand Prix - 2010. For the first time in the history of the series a Russian pilot showed himself at start position - Vitaly Petrov made his debut in Renault team and performed well, even if he didn't finish the race.

As for the race, Fernando Alonso has kept his third record victory in Sakhir to date and won his first Grand Prix as part of Ferrari team, following Kimi Raikkonen, whom he replaced in Scuderia.

Becoming a champion again German Sebastian Vettel started the new season poorly - the title holder had to wait for his first pole position, first fastest lap and the first victory right up to the fourth stage, which became the Grand Prix of Bahrain.

As a result, the Red Bull Racing pilot won the qualification, was the fastest on a single lap of the race and was the first to see the checkered flag coming out to the first position in the individual competition of the season 2012.
Among other things the German extended the unique series in which the first four races were won by four different pilots – later it became clear that the same "destiny" awaited him for the first seven weekends of the year.

Bahrain Grand Prix, which has recently turned into a race gradually shifting from day to night, will be interesting exactly from the point of view of statistics: who will be able to pull Alonso back in the rank of the most successful pilots of Sakhir - Vettel or Hamilton? Well, the race in the Middle East entourage and with artificial light, of course, will be interesting in its own.